Collecting Data
To generate the Legislative Effectiveness Score and related metrics, we rely on computer code to collect all relevant information from the Library of Congress website, www.congress.gov, for every public house bill (H.R.) and senate bill (S.) that was introduced into the 93rd – 115th Congress (1973-2018). For every bill, we identify the sponsor and every step in the legislative process as identified in the “All Actions” section of the bill summary, as well as all amendments that were proposed for the bill. After collecting this information, we code the dates and incidence of each major stage of each bill’s progression through the legislative life cycle, serving as the foundation for our metrics.

We categorize all bills as being either commemorative (C), substantive (S), or substantive and significant (SS). Our categorization is based on the following coding protocol. A bill is deemed substantive and significant if it was introduced during the 93rd – 113th Congresses, and had been the subject of an end-of-the-year write-up in the Congressional Quarterly Almanac. For bills that were introduced into the 114th Congress and subsequent congresses, a bill is deemed substantive and significant if it was mentioned on two or more occasions in the stories published in Congressional Quarterly Weekly/CQ Magazine during that Congress. A bill was deemed commemorative if it satisfied any one of several criteria, such as providing for a renaming, commemoration, private relief of an individual, and the like. Finally, all other bills, and any erstwhile “commemorative” bills that were also the subject of a Congressional Quarterly write-up (as detailed above) were classified as substantive. For each of these three categories of bills we relied on our five important stages of the legislative process (above) to produce our final set of fifteen indicators.

Having compiled fifteen indicators of effectiveness, we calculated a Legislative Effectiveness Score (LES), for each member i, in each Congress t, as follows: 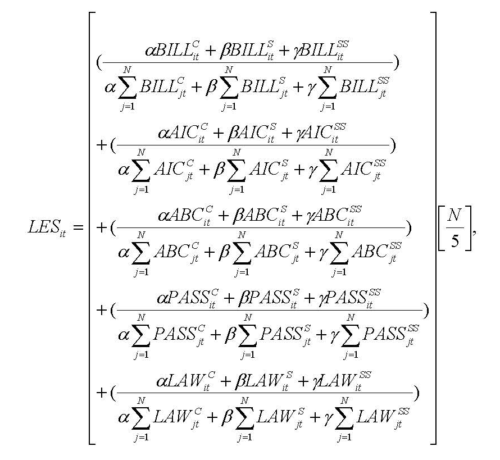 where the five large terms represent the member’s fraction of bills (1) introduced, (2) receiving action in committee, (3) receiving action beyond committee, (4) passing the House, and (5) becoming law, relative to all N legislators. Within each of these five terms, commemorative bills are weighted by α = 1, substantive bills by β = 5, and substantive and significant by γ = 10. The overall weighting of N/5 normalizes the average LES to take a value of 1 in each Congress.

We employ an identical methodology to calculate a Legislative Effectiveness Score for each member of the U.S. Senate.

Interest and Legislative Effectiveness Scores
To calculate the Interest and Legislative Effectiveness Score (ILES) for each issue area, we employ an identical analytical methodology to what was used to calculate a legislator’s LES, simply on the subset of bills within that issue area.  To categorize each H.R. and S. bill into an issue area, we rely on two data sources.  For bills that were introduced in the 93rd-111th Congresses (1973-2010), we rely on the Congressional Bills Project, which categorizes each bill into one of 19 issue areas, as described by the Comparative Agendas Project.  For bills that were introduced into the 112th and later Congresses, we rely on the policy area categorization that is employed by Congress.gov, assigning one of 32 broad policy area terms to each bill that is introduced into the United States House and Senate, where the terms are assigned by legislative analysts in the Congressional Research Service.  In cases where there was obvious overlap between the Congressional Bills Project Codes and the Congress.gov codes, Congress.gov codes were combined into one issue area, such that we ultimately assign each bill that was introduced from the 112th Congress on into one of 21 issue areas.